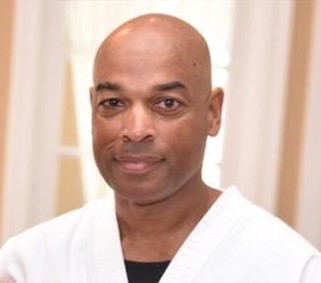 LTC (RET) David C. Lyles is a 7th Dan black belt (A-7-14) and the official Spokesperson of the Unified International Taekwon-Do Federation (UITF) , under Grand Master Hwang Kwang Sung (K-9-1), Founder of UITF. He is a 4th Dan Black Belt in Kukkiwon Black under Grand Master John Pelligrinni, Independent Taekwon- Do Association (ITA) and 2nd Dan Black Belt under USAGOJU Karatedo Federation. He has been studying Taekwon-Do since 1974, originally under Jhoon Rhee Style of Taekwon-Do (Original Chang Hon/ITF) Forms. He is the Founder of Unified International Taekwon-Do Federation-Armed Forces, an umbrella organization established to unify military Taekwon-Doist from all branches of the services as well as foreign military members. He is the senior instructor for FishHawk TKD, located in Lithia, Florida.

He retired from the United States Army in March 2014, having served 30 years, 1 month and 29 days. He served in combat from Desert Storm in 1991, Bosnia in 1997, and Iraqi-Freedom from 2004-2011. Additionally, He has conducted numerous other missions abroad. His military deployment afforded him the opportunity to teach Taekwon-Do internationally to the Iraqi Special Forces, NATO troops, as well as local and international military forces. He established the Unified International Taekwon-Do Federation-Armed Forces to bring together members of the military from all nations who study and or practice Taekwon-Do. Upon retirement, he started his own school at FishHawk Ranch, Lithia, Florida.

He has been married for 29 years to Mrs. Desiree Laverne Lyles. He has two sons, David Alexander and Devin Carl. He holds a Bachelorof Science Degree in Economics from Northern Illinois University, and a Juris Doctorate of Law from the University of Arkansas, Little Rock. My hobbies outside of martial arts are running 10K, 1⁄2 and Full Marathon, SCUBA Diving, Biking, and Golfing.